Enec´s members compile academic papers together to collect information and new insights.
Read them and take advantages of our collaboration.

Adopting a life cycle perspective through ISO14001: a game changer

The ISO 14001 standard was extensively amended in 2015. The new version of the standard suggests a closer alignment of traditional environmental management systems with the footprinting approaches (Life Cycle Thinking) adopted by many corporations in recent years to assess the environmental performance of products and companies. As a result, a new link is also established with ecodesign practices.

Context, risks and opportunities, performance and leadership are the four key new concepts enabling the bridge between management systems and company or product performances based on an enlarged life cycle perspective. Environmental aspects are now considered at corporate strategic level, opening the door for more integrated and structured ecodesign within companies. This document is intended as a guidance document to enable the understanding of the full consequences of integrating life cycle thinking within management systems and of how new opportunities arising from the integration may be seized. This guidance document intends to support companies and auditors in the adoption of the new standard and further promote ecodesign principles and applications. (2017)

A shared vision of ecodesign underpins ENEC projects and acts as the foundation for current and future ENEC activities.

This vision has been co-created by the ENEC partners, by combining each partner’s unique understanding of ecodesign, identifying similarities and acknowledging differences. This co-creation process has been supported by existing academic literature and regional case studies of ecodesign to identify best practice criteria. (2014)

Motivations for and Barriers to Ecodesign in Industry

Evolving understanding of ecodesign enablers and inhibitors can enhance ecodesign support services by transferring motivations to wider industry and conceptualising and testing methods to overcome inhibitors.

This paper summarises the literature in this area as a baseline for future work of the European Network of Ecodesign Centres (ENEC). The review of academic literature is supported by evidence gathered from past research activities and insights from across Europe shared by ENEC partners. (2014) 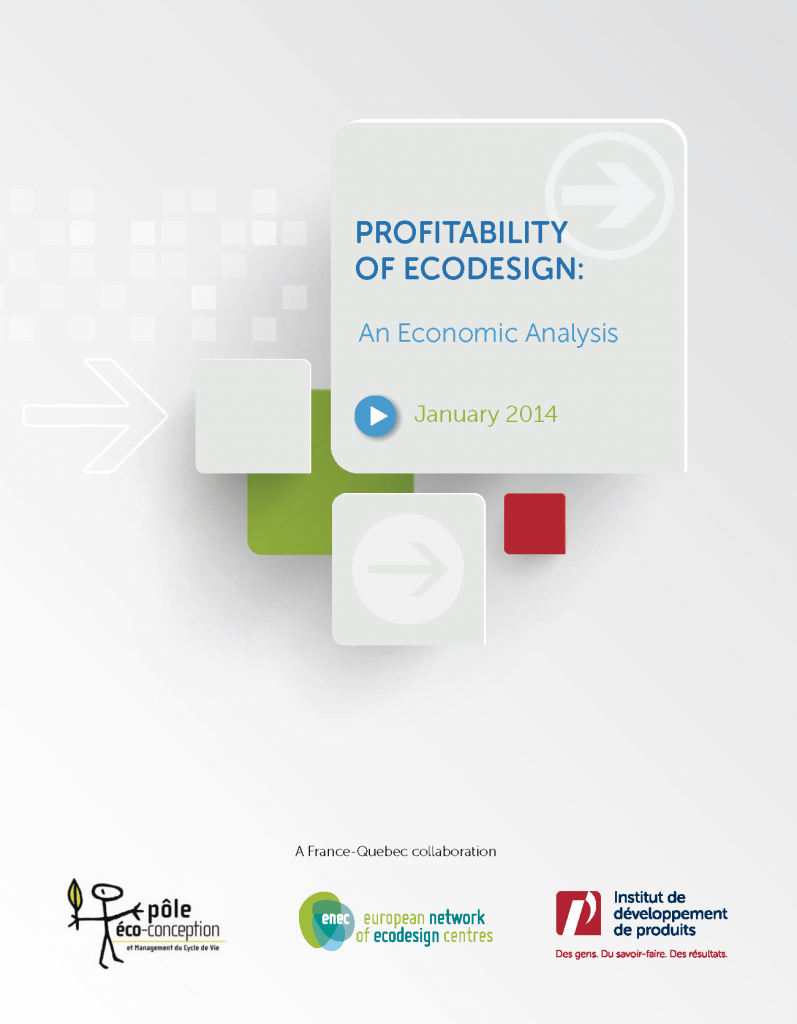 Ecodesign is an increasingly common practice in business, but a fundamental question remains for which no precise answer has yet been provided: Is ecodesign profitable?

A 2008 exploratory study sought to answer this question with a sample of 30
companies from France and Quebec. Five years later, we thought it was time to take another look at the situation, widen the sample size to obtain more robust statistical results, and try to understand what makes a given ecodesign approach more profitable than another one.

The hypothesis is that the greater the intensity of the ecodesign approach and the better the company’s overall management, the more profitable the company would be. The main results of this new study with 119 companies are set out below. (2014)

Click here to read the publications from our partners, too!